Attukal Ponkala Festival of Kerala is exclusively for women and is held at Attukal Bhagavathy Temple in Thiruvananthapuram city. The specialty of this festival is cutting across faith, caste, creed and colour, the heights of devotion witnessed during this festival in Thiruvananthapuram, the capital city of Kerala, is quite phenomenal. Attukal Pongala is recorded in the Guinness book as the largest gathering of women in the world.

This annual festival commences on Karthika star day in Malayalam month of Makaram-Kumbhom (February - March) with the chanting of thottampattu (a song praising Bhagavathy)and continues for nine days. On the 9th day, Ponkala is made and offered to the goddess. Pongkala means boil over.

Attukal Pongala in 2017 - March 11 (Saturday) (The date changes every year in accordance with Malayalam calendar). 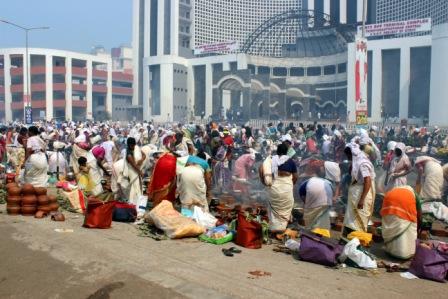 Ponkala- Ponkala (also spelt as Pongala) means golden pot. It is a sweet payasam made with a sweet offering of rice, jaggery, plantains and coconut, in earthen pots. The devotees assemble in the temple premises with the payasam ingredients, the earthern pots, bricks and firehood. The cooking preparation starts in the morning and by noon would be over. The queue of the women come for ponkala making, stretches into few kilometers. The priest lighting the Pandara Aduppu, chanting of devotional songs, mark the beginning of the pongala.

Though it is a Hindu festival, the other religious people also offer their place gladly to the devotees to do their pongala. Ponkala payasam is believed to be the most favourite offering of the goddess.

After Ponkala, the priests about 250 in number, go around and bless the devotees by sprinkling holy water on them and their offerings (pongala). The women return home with the prasadams with heartfelt happiness.

The idol of the Attukalama is taken in procession to the Manacaud Sastha Temple accompanied by thalapoli, kuthiyottom, annam, vahanam and, caparisoned elephants amidst the percussion. After the necessary poojas the procession returns the next morning, and the festival ends with 'Kuruthi Tharpanam' at night.

Lakhs of women from Kerala and other parts of the country participate in this festival. The spirit of unity is an important feature of this festival. Though it is held in the temple premises, it extends to about several kms radius, to accommodate the large number of women devotees who come here from different parts to prepare and offer pongal to the goddess. The women do this for the well being of their husband and children.

Every year the number of devotees attending the Pongala festival to get the blessing of Attukal Devi is increasing in lakhs.  Keeping away their urgency, many celebrities too attend this festival.

Special trains will be usually arranged for the devotees to attend this grand festival.

For every festival there will be an amusing story behind it. In the case of Attukal Pongala also it is not different. It is believed that Bhagavathy Attukalamma is considered as the incarnation of 'Kannaki', the heroine of 'Silappathikaram' by Tamil Poet Illango in 2nd century A.D. Attukal temple, is one of the places where Kannaki took rest on her journey from Madurai to Kodungallur. It is believed that Bhagavathy (Goddess) appeared as a child before an old man when he was performing his evening oblations at River Killi. He was surprised to see a child there at that time, and he helped her cross the river. He took her home along with him, but on reaching home she was not to be seen. On the same night, Goddess appeared in his dream and told him about three lines she had drawn in a sacred grove nearby, where she would like to stay. Surprisingly, the old man saw those three marks in the specified place, and built a small temple there, and the Goddess brought wealth and peace to the people there. Gradually, the temple was renovated to the present status. To ensure security to lakhs of women who come there to offer pongala, seeking divine blessings, Government deploys large number of police forces. Because of this security arrangement, this grand festival goes on smoothly year after year.

How to reach there - Attukal Bhagavathy temple is just 2 kms away from the Thiruvananthapuram Railway Station, and from the Central Bus Stand.

Back to Indian Festivals