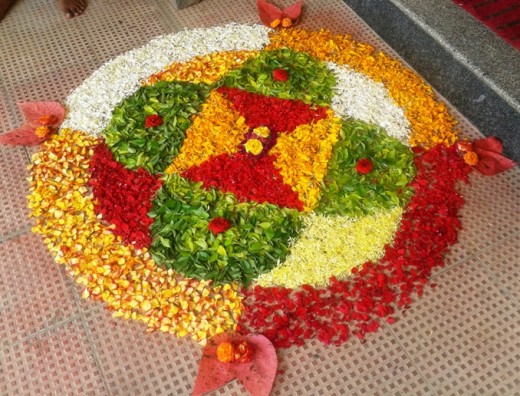 After the torrential rains of Karkidakam month, also called as Ramayana month, the sky becomes clear blue and the forests deep green. The flowers are in full bloom. That is the time for the celebration of Onam.

1. Onam is celebrated by all people of Kerala (India), and globally by Keralites.

3. Onam Pookkalam (The floral carpet made for this occasion)

6. Kaikkottikkali (a group dance of Kerala, by women)

Kerala gets ready to celebrate and rejoice the State Festival Onam in the following month of Chingam (Bhadrapada), which falls usually at the end of August or beginning of September.

Onam is a ten-day harvest festival starting with “Atham” and also the greatest festival of Kerala. After a bounteous harvest, Onam is the time for the farmers to celebrate the bounties of nature and make merry. A unique feature of this festival is that it is celebrated unitedly by all Keralites without caste or religious differences. Every Malayali wherever he or she may be in the world celebrates Onam. More details can be found in this book of Festivals of South India.

Read a short story about Onam

History of Onam : Every festival has a legend behind it. Onam too has an interesting legend. It is celebrated in the memory of the golden era of King Mahabali who is believed to be visiting his people for Onam. During his reign, the people of Kerala were extremely happy and content. There were no robberies, corruption or betrayals. Though Mahabali was an Asura king he was very good and truthful. Devas were worried about the king’s popularity and requested Lord Mahavishnu to control his power. To test his truthfulness, Lord Mahavishnu visited him in disguise as Vamana, a dwarf Brahmin, requesting for three feet of space to live. Without realising his intention, the king agreed to his request. Suddenly Vamana began to grow and he covered the whole earth by one foot and covered the sky with other foot. When Vamana asked for the third foot, Mahabali had no other go, but to show his head. Vamana kept his third foot on the King’s head and the King was pushed down under the earth. Realising the true form of Vamana, Mahabali requested the lord to permit him to visit his people once a year. His request was granted and Onam is the yearly celebration of welcoming the benevolent ruler.As a symbolic gesture to welcome ‘King Mahabali’ attractive pookkalam (a floral decoration) with or without a clay mount in the center, is laid in front of every home starting on Atham day, which will continue till Thiruvonam day. The pookkalam is usually circular in shape and multi-coloured. Making a Pookkalam is a colourful and joyous event for the young girls. I still remember vividly the good old days as children how excited we were, giggling and joking, to collect varieties of flowers and leaves to arrange the pookkalam in our family courtyard. Onam, like many other festivals, is a time for new clothes, called Onakkodi. The head of the family distributes new clothes to the family members and their dependents. 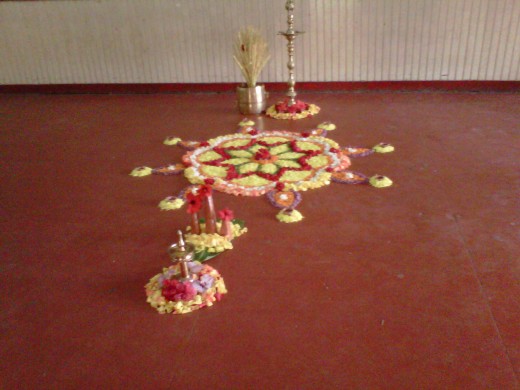 Onam Sadhya : The ten days of Onam are meant to be the happiest days of Kerala. There is a popular saying in Malayalam about the importance of Onam.  Kanam vittum onam unnanam. (Onam must be celebrated sumptuously even if one has to sell one’s material belongings). A sumptuous meal on plantain leaf is served in every house. The main items for the sadhya include sambar, kalan, olan, pachadi, aviyal, elassery, thoran, puliyenji, naranga curry, papad, banana chips, sweet banana chips, and steamed Kerala banana pieces and the traditional payasam.

Men do the Pulikkali. They paint their bodies with leopards spots and dance in front of another group of men dressed like hunters.

The children play overwhelmed at the new swing tied between trees in addition to many traditional games during this festival.